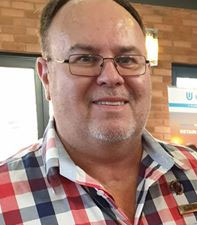 Deon Nel is a South African knifemaker living in Port Elizabeth in the Eastern Cape. Port Elizabeth is an area where the sea and bushveld come together. It is a perfect place for Nel’s hobbies of fishing and hunting. Born in 1962, he qualified as a tool, jig, and die maker in 1986. He moved into the building trade in 1987.

From an early age, Nel was interested in hanmade knives. He did a knifemaking course with Thinus and Gawie Herbst in September 2008 and by December 2008 he started making knives full time.

Nel joined the Cape Knifemakers Guild in 2008. With the help and coaching of renowned knifemakers Rob Brown and Cedric Pannell, he became a member of the Knifemakers Guild of Southern Africa in 2011. Deon makes both fixed blades and folders and is considered among the best Loveless style makers in South Africa.

Deon has won numerous awards over the years including: