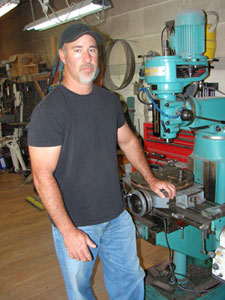 Ron Best was born in 1972 in Wilmington, NC, and currently resides in Stokes, NC. He became interested in knives when he was about seven years old, earning the wrath of his father when he would grind up wrenches in his early attempts at knife making. In 2000, Ron made good all past transgressions by making a meat cleaver for his father - and enjoyed the process so much that he decided to keep doing it!

Ron makes about 12 knives a year, usually folders and integrals, where all the metal parts are formed from a single piece of steel. This integral technique shows off Ron’s tremendous control and finesse. His current favorite steels are 440C, D2 and ATS-34, but he also works with Mike Norris’s damascus.  As for handle materials – he’ll try anything once! Ron does all of his own carving, using files and sandpaper, and all of his own heat treating as well. All of his knives are intricately carved and finished, and CNC machinery is never used during this process.

Ron works very hard to design and create unconventional and fascinating knives. His knives often evolve between the sketch and the finished product, as Ron finds that the knifemaking process develops the design as much as his sketches.  He is a self-described perfectionist, and takes a great deal of satisfaction in putting the last few finishing touches on a knife he’s made.