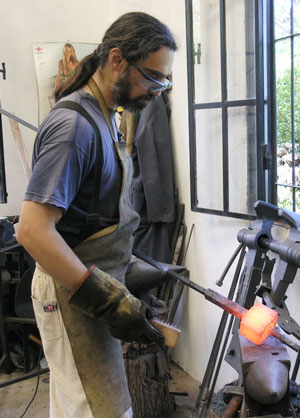 Mauricio Carlos Daletzky is a bladesmith living in the picturesque town of Sauce Viejo, Argentina. He has been working as a bladesmith for over 27 years and creates some of the most dramatic and elegant knives coming from the region. His skill and attention to detail are unrivaled.

Daletzky brings together some spectacular skillsets. From 1987 - 2002, Daletzky worked as a jeweler. This gives him a tremendous attention to detail and skill at working with fine metals. He is an expert engraver. In 2002, he followed his passion for knives and dedicated himself to learning to forge damascus..

In 2012, Mauricio formed a bladesmithing school in Argentina, where he teaches over 70 students each year.

Daletzky's exquisite knives can be found in collections throughout the world. Over his career, he has won numerous awards including: