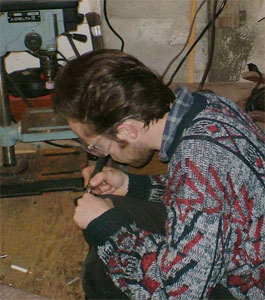 Canadian bladesmith Mark Banfield specializes in hand forged, one-of-a-kind knives. He tests each blade before finishing it, and every knife is tested again before being offered for sale. He believes a knife should be well designed, and that good steel and practiced craftsmanship do not always make beautiful knives. Mark spends a lot of time working on new designs and is especially inspired to create knives that he considers graceful. He carefully considers how the design could be at its most beautiful while still at its most functional.

He prefers natural materials for his handles, with his favorites being fancy hardwoods, particularly burls. He exclusively uses carbon steels, and has forges his own damascus. Be it a fine art knife or a simple blade, he chooses materials that will make the most of the design. All handle and sheath work is done exclusively by Mark. Frequently his knives feature intricately carved handles in various motifs including vines and leaves.

Mark's knives are made mostly by hand using tools such as files, scrapers, and lots of sandpaper. He forges by hand using a 4lb hammer and then 2lb hammers. After forging, every blade is normalized at least three times before annealing. He then uses an angle grinder to remove the scale; sometimes, at this point, he uses a scraping tool (similar to the tool bladesmiths used hundreds of years ago) to thin out the blade. Using a belt sander, he sands the blade to about 150 grit before hardening. Afterwards, the blades are double or triple tempered, then tested for edge holding and toughness. Mark prefers hand satin finished blades to mirror polished. Frequently his knives feature differential heat treatments with a dramatic temper line. He loves temper lines because of what they reveal - the quality of a blade is clearly apparent.

Washington knifemaker Webb Hammond creates flint knapped knives that are true museum quality. This stunning display combines a sled runner artificat with Webb's expertly knapped custom knife. This knife was kept in a private collection since it was made. It is in brand new condition and by all appearances, Webb could have made it yesterday.
The white flint blade is hand knapped to a sharp edge. Webb used a traditional technique to hold the blad in place - black pitch. The handle ancient walrus ivory that is between 6000 and 9000 years old. Deep colors have leached into the ivory from surrounding soil over the centuries.
The knife is accompanied by a presentation stand. During the early to mid 1800s, Yupic Eskimos used ancient walrus ivory for a wide range of tools including fire starters, fishing weights, halibut hooks, and sled runners. A section of artifact Yupic sled runner is set on a wood base. Mounting holes and general shape from its former purpose as a sled runner are intact.
Exceptional work throughout!