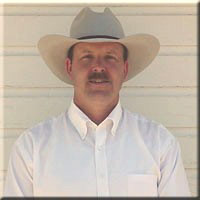 When Ed Caffrey was a boy, he worked on a farm to save up money to purchase a new knife for the following trapping season. Of course, once he bought his new knife, he couldn't wait to use it – but when skinning his first catch of the season, he sharpened his new knife five times. From that point, the search was on for a better knife!

Upon reaching adulthood, Ed joined the U.S. Air Force, and shortly thereafter, married his wife Cindy. The military took him to Europe for a remote tour of duty and upon his return to the U.S., he moved to Blytheville, AR, where he met his first two mentors, joined the ABS, and began his quest to become a bladesmith. His landlord allowed him to build a small 8'X12' shed in the yard, and as his first shop took form Ed began his forging career.

Ed’s first knife sale was in 1989. Up to that point all the knives he had made were given to friends and family members. One afternoon a man walked into Ed’s shop while he was working on a small cable-damascus hunter. The man introduced himself and told Ed that a friend of his had shown him a knife Ed had made. They chatted as Ed worked on the hunter, and out of the blue he said "I'll give you $40 for that knife you’re working on." At that time, $40 represented enough money to purchase handle and guard material for six more knives! Ed accepted the offer, and his career as a professional bladesmith began.

Ed was transferred to Great Falls, Montana in 1992. Upon finding a house, his first priority was to build a shop and get his knifemaking back up to speed. In 1994, Ed was honored with his ABS Journeyman Smith stamp, and began to teach bladesmithing at hammer-ins and in his shop. In 2000, Ed achieved his ABS Mastersmith rating and has never looked back. Since his retirement from the miliary in 2003, Ed has been a full-time bladesmith.

Ed produces knives from working-grade field knives to high-end collector-grade pieces, including folders. Nearly everything he produces is forged, with mosaic damascus being his current passion. He frequently teaches bladesmithing at hammer-ins and seminars, and offers one-on-one classes in his shop. He tells me that he feels blessed to have taught all over the U.S., Europe, and Canada, and to love what he does for a living.

Ed credits Eric Harris for introducing him to the forge, and has a deep gratitude to Beryl Driskill, who taught him there is more to fit and finish than epoxy and solder.

Some of Ed's awards include