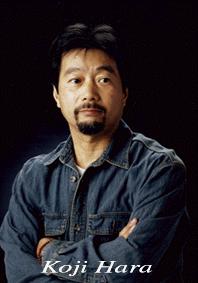 Koji Hara began making hunting knives in the style of Bob Loveless for the Gsakai company in 1988, where he worked for 7 years. After leaving Gsakai in 1995 he proceeded to make custom folders in entirely his own style. He is well known for his distinctive "air step" technique, which he developed in 1997. He enjoys using abalone and pearl in his knives.

In making blades, he most often uses a steel called Cowry-Y, a powdered stainless steel made by Daido Steel which holds an excellent cutting edge and polishes to a high mirror finish.