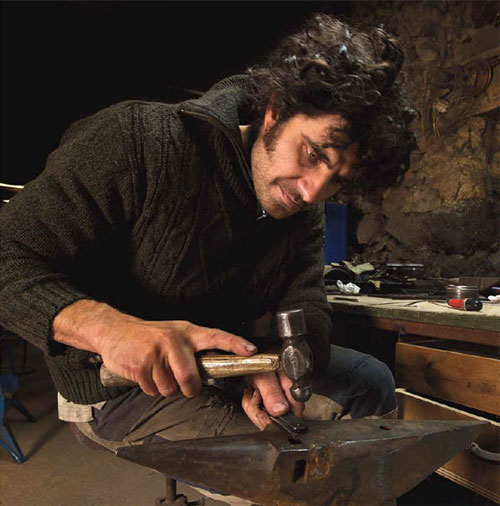 Mickael Moing, born in 1971, lives in Auvergne, France with his wife. His two daughters (now grown up and moved away) spent their youth running through the ancient barn that serves as his smithy. This workshop, where he forges blades, mounts the handle scales, and sews leather sheaths is both a cabinet of curiosities and black socerer’s den. The smell of woods permeates – yew, boxwood, oak, and juniper. Various materials including mammoth ivory, mother of pearl, antlers, and marlin bill overflow from drawers.
At a young age, Mickael was fond of nature. He wanted to create something out of the wilderness. Inspired by Laguiole knives, he created a folding knife with bamboo scales. Later on, he became interested in making knives but had no means to do so. Being the handy man he is, he built his first crude forge from scrap metal that he could find. His anvil was made from railroad track. His first knives were made from car leaf springs.
Moing studied agriculture in college while also learning how to sculpt. He sculpts with scrap metals and transforms them into fantastic beasts such as lions, wolves, elephants. He frequently incorporates sculpting into his one-of-a-kind folding and utility knives with highly carved handles.
Mickael is self-taught, allowing him to create a style all of his own. He often creates his knives with a brute de’ forge technique, showing his tremendous skill with a hammer. Today, he continues to hone his craft, making his own damascus steel while integrating nature, animal bones and wood, into his spectacular knives. He is no longer taking orders and continues to be inspired by the nature that he finds in his surroundings.