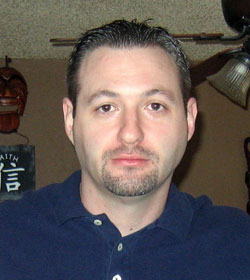 Sam lives and works just south of Seattle, WA, and made his first knife in 2008.  He was looking for a new and challenging hobby, and as a collector he found that making knives was the next intuitive step. His work follows in the artistic vein popularized by Mastersmith Wally Hayes, Gil Hibben, and Mike Snody, all of whom make original and inspired tactical fighters with a heavy Japanese influence.  Sam now works full-time making knives, turning out about 125 pieces a year.  He spends between 15 and 20 hours on each of his fixed blade knives, taking the most satisfaction at the moment a knife takes shape for the first time. Sam works exclusively with stock removal, with 154CM stainless being his favorite steel – he loves that it is both easy to work with and takes an excellent finish.  He enjoys experimenting with variations on traditional Japanese handles using modern materials.

Sam started out as a self-taught maker, but he met Todd Begg soon after he began his new hobby.  He had brought the tenth knife he had made along to show his friends at a small party -- a party that Todd attended as well.  Sam found Todd to be very knowledgeable and generous with that knowledge. With Todd’s feedback, Sam was able to significantly improve his knifemaking in a short period of time. Sam has a lot of respect for the design and construction work of both Todd Begg and Mastersmith Kirk Rexroat, and like them, he hopes to create pieces of functional art that are a joy to use.

There’s an element of the fantastic in Sam’s knives, with stylistic references to both feudal Japan and the contemporary military.  His most popular knife to date is the tanto dashi – he enjoys the look of a tanto style blade and this is evident in his interpretation of bowie knives as well as his neck knives and larger fixed blade pieces.  His design process is organic – he’ll sketch many ideas before making a scale model and the design continues to evolve as he begins the work in steel.