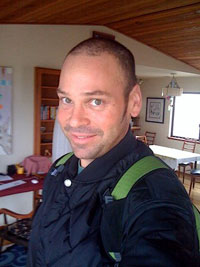 Don Carlos Andrade is a knifemaker, sculptor, chef and teacher living in California. His interest in handmade knives began in 1985 when he entered culinary school in Los Angeles. There, he saw his first knife made entirely by hand. Eventually, he began to buy and sell one-of-a-kind knives to educate himself about cutlery. Inspecting the various knives and testing them in the kitchen and in the outdoors informed him about the value of a well-made knife. He discovered what he liked about certain styles of knives and found that knives created from carbon steel often out-performed those made from stainless steel.

As he tested and collected knives, he became interested in bladesmithing and made his first knife in 2006 under his mentor, Tai Goo. Goo and Andrade continue to be fast friends and Don has made a pilgrimage to visit Tai Goo each year since they met in 2006. Don describes Tai as a veritable wealth of knowledge, and holds the work of his mentor in very high regard. Don also acknowledges the works of Wayne Goddard, David Boye, Jay Hendrickson, Christoff Derringer, Rodrigo Sfreddo and Gustavo Vilar as both inspiring to him personally and producing work of excellent quality. Don draws much of his design inspiration from his mentor, Tai, and from the traditional cutlery of the old masters of the culinary blades. He uses no templates other than on a very few designs that he reproduces in limited runs. He prefers to draw his ideas and then form each knife as an individual creation.

Don’s favorite thing about making knives is the transformation of material. He’s been making art for over twenty years and considers “transformation” as the consistent thematic idea over his entire body of work. He greatly enjoys forging steel -- forging the blade at the anvil and completing the finishing work by hand with filing and sanding. This process is time consuming and to do it well requires a high level of skill. He feels that by draw filing, rather than grinding, he can achieve the subtle geometric variations that a fine knife needs for both function and beauty. This is particularly true of culinary knifes, which are among Don’s favorite pieces to construct. The challenge of making a quality chef knife is one he really enjoys, and the sculptor in him just can’t help but carve the handles as well!

Aside from culinary knives, Don also constructs camp knives of various styles and sizes. He enjoys making integral knives. They are challenging and for the first two and a half years of his knifemaking this was his focus – integrals forged from round bar. Don makes his fixed blades for using, and finishes his knives to a degree that “encourages use and not pretentiousness.” He hopes to work on some artistic collaborations in the future.

Don creates around 24 knives per year, with most knives taking 40 - 50 hours to complete, with a clay heat treatment adding a few days to the process. Don is usually working on several knives at a time, with many pieces in different phases of the process.

Don Andrade's shop is small and simple. He chooses to do almost all processes by hand so he requires very little room. He forges on a Nimba Anvil using hammers that he has made. He forges each knife to shape, removes scale with a hand stone and water, and draw files the final geometry for each blade. While draw filing, he does several sub-critical thermal stress-relieving cycles, finally sanding and heat treating his own knives. Don uses a traditional heat treatment process, one that has been done for hundreds of years. He creates a rich atmosphere in his furnace, soaks the blades at critical temperature, quenches the blade in oil, and finally tempers the blade.

Don’s favorite steels are 1095 and 1080 carbon steels for chef knives and 1065 or recycled spring steels for camp knives. His favorite handle material is desert ironwood. While he uses other woods, he believes that the desert ironwood is by far the most stable and beautiful of all.

As well as bladesmithing, Don is a well known photographer, art teacher, sculptor, and musician. Most recently, he returned to school and studied humanities, philosophy, art and psychology and graduated with a degree in fine arts. His primary focus in the studio (when not making knives) is in creating bronze and stone sculpture, but he also finds time for print making and a little painting.