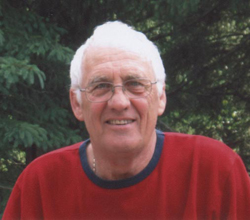 Knifemaking has no limits. A knifemaker has the ability to create a lasting tool, whether for use or a treasured keepsake. As such, Emil is grateful for his craft. He hopes the knives he’s created will outlast him, and continue to enrich other people’s lives. When Emil began knifemaking, he turned out between 25-30 knives a year but now he is making around 12-15, due to the increased complexity. In the 25 years that he’s been making knives, 15 years was part time. After shutting his marble and tile business, he built his knife shop - and now he spends most of his time there. His inspiration comes from a number of knifemakers; those who he admires the most are Wolfgang Loercher, Tim Herman, Owen Wood and so many more.

Emil’s bladesmithing skills have been honed by experience, the exchange of ideas with other talented artists, and publications dedicated to the knifemaker’s art. He made his first knife sometime around 1986, after replacing some knife handles on a set of Henkels kitchen knives he and his wife received as a wedding gift. Emil taught himself, by way of reading and then trial and error! He made his first knife because of his interest in building and making things, as well as his interest in the outdoors, hunting, camping and fishing. At the time, he was doing woodworking and some jewelry but after buying several knife publications and seeing that people were making knives by hand, he was inspired to give it a shot and it’s been a big part of his life ever since. The thing about making knives that Emil likes most is that he can make a working tool - whether it’s a kitchen knife, hunter, folder or axe - and make it look beautiful. A working tool does not have to be ugly, and Emil believes that it does not make them any less a tool because it is dressed up.

Emil Bucharsky lives near Spruce Grove, Alberta; just minutes away from the city of Edmonton on a rural acreage. When not making knives, Emil spends time with family and friends. They take trips in their trailer, do wilderness camping, hunting and fishing. He spends a fair amount of time building his own knifemaking equipment and tools for his craft. In fact, he built his shop and most of his knifemaking tools such as belt grinders, pin presses and taping jugs. He does his own heat treating in an oven he built along with a rebuilt tempering oven which allows him to temper immediately after heating. He also does his own hot salt bluing on damascus and steel fittings.

After attending a workshop dealing with pattern welded damascus, Emil was captivated by the many different materials and processes involved and was soon inspired to forge his own damascus blades. This encouraged him in his enjoyment of making folders. He likes that he can be more creative with curved lines and the materials he chooses. Knifemaking has many disciplines within itself: forging, creating damascus, engraving, carving, and leather work – a good maker is always learning! Emil forges his own damascus but also likes to work with stainless steels such as 154CM, CPM154, CPMD2, and S30V. He also likes ELMAX and RWL34. Mother of pearl, ivory, stag, damascus and stainless steel, along with gold - and gemstones such as ammolite - are among his favorite handle materials.